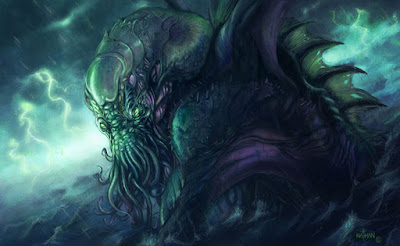 Cthulhu is an indifferent elder god whose clerics grow accustomed to being ignored by their deity. Unfortunately the deity's eyes open slightly from his sleep when the cleric begs for help too often. Sometimes the cleric receives a blessing as well as a penalty for having annoyed the dark elder god. Cthulhu's ways can't be comprehended by mere mortals; even by his own clerics.

I will assume anyone reading this particular blog post knows how the Divine Disapproval mechanic works in DCC RPG.

This chart includes some entries marked as "Special" with a negative number next to them. These are entries that can't stack. If the cleric rolls one after having already rolled another, keep the first Special going until it's duration ends, as normal, but penalize the cleric by the number in parentheses to all checks.

Special entries may also recover an ability previously lost by a non-special entry.

1. (1 or less) “Chant, human” Cthulhu is annoyed by the cleric’s constant demands. The cleric receives -1 to all checks until he prays for 1 turn (10 rounds) by chanting “in his house at R’lyeh dead Cthulhu waits dreaming”.

2. “Bow, human” The elder god demands the cleric kneel and chant for one hour. The cleric takes -1 to all checks until this is accomplished. The penalty can stack.

3. “No” Cthulhu weakens the spell or ability the cleric was using upon receiving this disapproval. It is now rolled at -3 for the next 2d3 hours. The penalty can stack. The Cleric also rolls on the Minor Corruption table (page 116).

4. “I shall not restore the weak” Cthulhu refuses the cleric’s request to Lay on Hands on anyone except Neutral worshipers of Cthulhu for 1d3 hours.

5. “Bring more praise to me” Cthulhu demands new worshipers to praise his greatness in a dark cult. The cleric takes -1 to all checks for 1d7 days or until he brings a new follower to Cthulhu. A ritual to bring a new worshiper to the god requires 30 minutes to prepare and chant around a magic circle. This penalty stacks if rolled multiple times before being fulfilled.

6.  “Arcane and idol are one” [special] Cthulhu refuses the cleric the power to Lay on Hands for 2d5 hours but the Cleric’s spells are empowered casting at +1d. The elder god also grants the cleric the ability to spellburn as a wizard during this time.

7. “Wear my mark” Cthulhu senses the cleric’s faith is weak and demands he show the universe that he is loyal follower. Roll 1d6 (1) eyes change pitch black, no pupils, (2) the cleric’s hair falls out, (3) the cleric gains a vestigial tentacle that crawls up his shirt to stroke his chin when deep in thought, the cleric has little control over this, (4) the cleric gains broken wings that jut out the back of his shoulder blades, always finding a way to slash through clothing or armor to reveal themselves (-1 to Diplomacy checks in human civilization), (5) any weapon the cleric wields turns pitch black when in his hand and puffs with dark otherworldly smoke, (6) the cleric gains a curious shifting eyeball on the palm of his preferred hand, it can see infravision for 30’ but only if the cleric concentrates and takes no other actions

8. “I’m dreaming” The cleric immediately loses access to the specific spell or ability that resulted in the Disapproval for 48 hours. 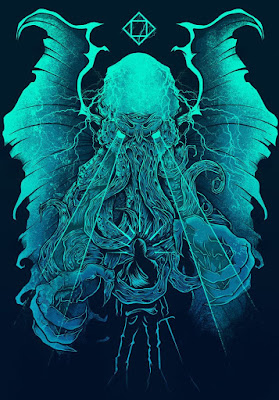 9. “Evolve” [special (-1)] The cleric goes into a sort of trance and his arms form into black wiggling tentacles for 1d5 days. The cleric can’t wield human weapons properly, or cast spells with these tentacles. He can Lay on Hands on compatriots but not himself. The tentacles do 1d6 damage and the cleric fights with them as if he had 18 Strength. Upon damaging an enemy the cleric heals the amount shown on the d6 (don’t include strength bonus) as he sucks the lifeforce from an enemy (not undead). If the cleric kills a human or elf victim with his tentacles before his body returns to normal he gains 1 HP permanently. The tentacles fall off and writhe around once the cleric has healed 1d16 + his total hit points in this manner; returning him to normal. (Example: the cleric has 6 hit points and rolled a 14 on the d16. He would have to siphon 20 hit points from an enemy before he returns to normal)

10. “Focus” [special (-1)] Cthulhu wishes the cleric to focus his prayers on one spell, turning the Cleric’s skin a pale gray during this time. Choose one spell in the Clerics list completely at random. He can cast that spell at +2d and gains the ability to spellburn. BUT he can cast no other spells or Lay On Hands or Turn Unholy during this time. When the cleric spellburns 4d6 total his other spells and powers return (roll 1d5) (1) in 24 hours, (2) in 2 hours, (3) in 2 turns, (4) in 1d3 rounds, (5) immediately

11. “Scatter my enemies” [special (-2)] The Cleric’s holy symbol begins to squirm and move like a small squid, as it is given an influx of power from Cthulhu in his dreaming. Any creature the cleric uses the symbol to Turn Unholy takes 1d5 damage rather than being simply turned. The holy symbol gives the cleric no power to Lay on Hands during this time. The effect lasts for 2d6 hours.

12. “I eat your fear” Cthulhu deprives the cleric of the ability to Turn Unholy for 2d3 days. Also roll on the Major Corruption table (page 118)

13. “Indifference” Cthulhu deprives the cleric of the ability to cast two level 1 spells, determined at random, for 1d4 days.

14. “Anger” Cthulhu the indifferent has noticed the cleric for all the wrong reasons. The cleric’s disapproval range stays at its current level and does NOT reset tomorrow as normal, but on the following day. Be wary of Cthulhu’s wrath.

15. “Your concerns are trifling” Cthulhu deprives the cleric access to 1d4+1 spells, randomly determined from all of the cleric’s spells. These spells cannot be cast for 1d5 days. The elder god’s wrath is shown on the cleric’s body in the form of a Greater Corruption (page 119).

16. “From beyond” [special (-2)] Cthulhu opens a portal across the cosmos centered on the forehead (third eye) of the cleric. Strange astral creatures shaped like fish but with lizard scales that shimmer with blue see thru light come out of the cleric’s forehead. One stays on his head, sapping his power and depriving him of all spell casting for 2d4 days. A number of the astral creatures equal to his cleric level will fight for him. Floating around in the air and whipping their tails about and biting at the cleric’s enemies. The Cleric can burn luck to reach into his forehead and pull more of the creatures out to serve; they disappear when the creature attached to his head disappears. (Astral Fish: 2d8 HD, +3 to hit, 14 AC (50% miss chance due to displacement), Bite 1d7; Saves +5 Will +5 Ref -1 Fort, Special: each successful attack saps energy from its victim that the cleric can direct towards a compatriot to add +1 to an ally’s roll this round)

17. “Die for me” Cthulhu deprives the cleric of the lay on Hands ability for 1d4 days.

18. “Sacrifice” The cleric suffers a permanent -4 penalty to all spells checks, lay on hands checks, and turn unholy checks. The only way to remove this is by sacrificing 10% of the cleric’s net worth for each penalty point. In other words, the cleric must sacrifice 40% of his net worth to return to normal. If the cleric sacrifices more than 1,500 GP of wealth in this way he gains 1 Luck point. 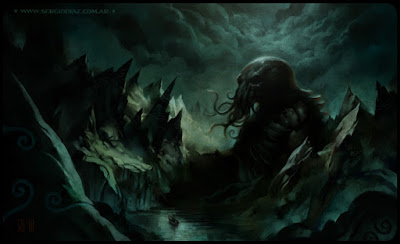 20. (20 or higher) “Join me in the dream” The cleric shimmers with the stars of the cosmos wherever he goes. Tentacles whip at him  from the astral plane, showing that his earthly life may be soon forfeit. Cthulhu is preparing to make a place for him in oblivion in the sunken city of R’lyeh where the cleric will surely die. Each time the cleric attempts to use a cleric power for 1d3 days, roll a luck check (1d20 equal or less than the cleric’s current luck score to succeed). On a failure, Cthulhu groans angrily across the cosmos and pulls the cleric through an astral gate and into certain doom and dreaming.